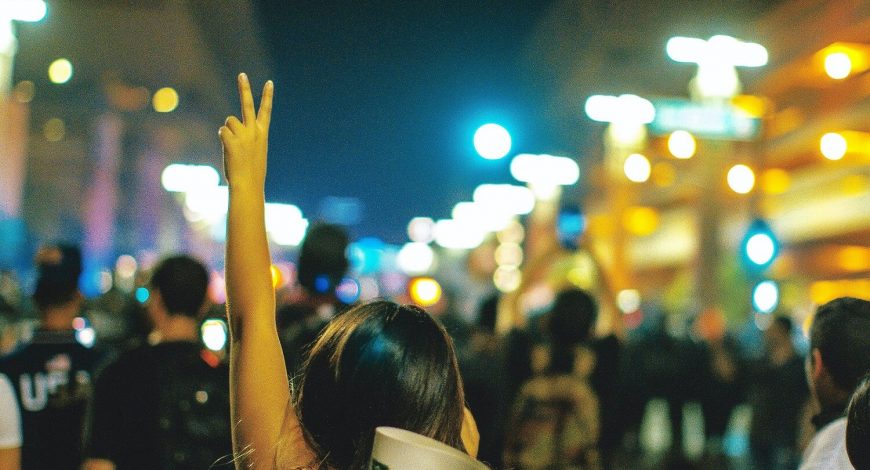 What does it mean to live in survival mode, to survive as an Asian American in a racist country? As a child growing up in a white suburb during the 90s “colorblindness” era, I wasted many years strategically accommodating White Supremacy.

Diminishing myself to uphold White Supremacy.

While we never discussed race in my childhood home, I knew I was a racialized body by age 4. Kids made fun of my eyes, told me to “go back” to Japan.

Well-meaning adults stared at me, attempting to guess “what,” precisely, I was: “What are you? You’re so beautiful!”

As though this was a compliment.

As though this was an affirmation.

As a child, the feeling the shame washing over me as I answered them, trying to be polite.

While they stared and stared.

Atworst, I was treated as less-than wherever I went — every classroom, every group, every friendship.

At worst, I remained silent while others accused me of stealing opportunities from them (the deserving whites) as white people imagined me benefiting from affirmative action.

At best, trying to view the label of “exotic” as a compliment.

At best, hearing from white people that I was “one of the good ones” — code for not being black, not being indigenous, not being Latinx.

At best, smiling (politely!) as white people told me they thought of me as white; that they could “not see race” in their relationship with me.

You might imagine that, from my childhood experience, I would develop a hatred for white people. Far from it! Instead, I learned the survival skill of strategic accommodation — surviving in a world where escape from White Supremacy — its systems of education, healthcare, governance, religious practices — was impossible. Self-destruction, self-mutilation…all in the service of survival.

I tried to be exemplary. I tried to fit in. It was very important, for this survival, to make my presence as a racialized body as non-intrusive as possible. To ensure white people around me were never uncomfortable.

Strategic accommodation is about survival. But it comes at a cost. It exhausts, diminishes. Unending emotional labor, all for white people. And the unforgivable thing about this, my dependence on strategic accommodation, was the way I navigated white institutions to secure a seat at the table — all while separating myself from black, indigenous, and Latinx folks. Mine was not a harmless strategy — it was toxic, destructive.

It took a long time to understand why I survived in this way. Why I let white people off the hook for engaging in harmful behavior. Why I would silence myself.

As a descendant of family members who were incarcerated in Japanese concentration camps in WWII, I inherited a powerful lesson in my bones, my DNA, my childhood teachings. To survive, each of my Japanese American relatives became an exemplary American. To escape from the internment camps, the men were forced to complete Loyalty Questionnaires, revoking all ties to their Japanese parents, their Japanese culture.

To survive, they recited the daily Pledge of Allegiance from behind barbed wire.

To survive, they joined the most decorated (and significantly injured) regiment in US history to fight in Europe.

To survive, they changed their last names to fight the Japanese on the Pacific front.

To survive, they did patriotism louder, and better, than any white person they knew.

My grandfather demanded perfection from my father. So did my father when he raised me. It wasn’t good enough to be “fine.” To survive, excellence was required. A very polite, very quiet excellence.

I have nightmares of the FBI chasing me, just like they hunted down my great grandfather. Like many descendants of Japanese internment, I always have a “go” bag — something packed with just the essentials in case I have to run away.

To survive, you must be exemplary. A stand-up citizen.

To survive, you must never make waves. Accommodate your way into excellence.

To survive, you must remain hidden. The FBI could get you at any time.

My heart breaks as I recall the countless conversations I willingly engaged in with white women who centered their discomfort with race over my humanity. How I willingly humiliated myself to prop up and comfort these white women, to wipe away their dangerous tears! Tears they cried because they were outraged by my very existence.

My anger boils over as I recall the countless times I remained silent as I allowed white men to tell me what race was really about. How I let them mansplain to me, how I absorbed their defensiveness, their aggression. It took years of therapy to undo the damage of white men telling me they understood my reality better than I did myself.

But my greatest regret, the grief that will never heal, is my knowledge that, for years, my strategic accommodation resulted in complete abandonment of People of Color (POC). As an Asian American, this harm cannot be resolved, cannot be forgiven.

All I wanted was a seat at the table of Whiteness. On the rare occasions, I was invited to that vaunted table, mine was never a voice taken seriously. Mine was a voice to be dismissed. And all the while, my very presence at the table was used by white people as tokenized justification for excluding other POC. After all, I was one of the good ones. A checkbox. A willing token. A model minority. A participant who survived by accommodating the insanity of White Supremacy.

Intersectionality is important. I have many privileges, many platforms. I am not in immediate danger of being interned. I am a business owner, married to a white man, formally educated beyond college. I have privileges my grandparents’ generation could only dream of having. They accommodated their way through life so I could have a shot at these privileges. But for so many years, I wasted my privileges in silence.

I became aware of Covid-19 in January 2020. Each morning I rode the bus, I noticed that when I would cough, people reacted in terror. It was reflexive, this terror. They were afraid of my face — my Asian face — that seemed to represent a vector of viral transmission. This is what a lifetime of accommodating White Supremacy has gotten me: regret, fear, and further invisibility.

I began to pack a larger “go” bag. I came up with contingency plans for my business. I anticipated mass hysteria. My friends thought I was nuts, that I was panicked over nothing. But White Supremacy is not an irrational fear. It is the very fabric of our society.

Once Chicago went into lockdown in March, a new threat emerged. As I walked in my neighborhood with my large dog, I experienced multiple threats. People tried to chase me, attack me — even with my dog barking in defense. I began to carry mace in my right hand wherever I went. Began to demand that my white husband accompany me whenever I left the house.

In spite of my well-laid plans, I did not, could not, have anticipated the long overdue outcry on a national scale against the rampant destruction of White Supremacy on human lives. As a POC, one who has abandoned BIPOC for far too long, I am no longer willing to be silent, to accommodate.

White Supremacy cannot sustain us. It is the Matrix — seemingly comfortable, draining our life away. Each of us enslaved, without a vocabulary to begin to name the ways in which we are being exploited.

For people like me, people of privilege, people who have platforms, strategic accommodation is no longer acceptable. Because what my life has taught me is that accommodating whiteness — its fragility, entitlement, and unceasing, unrelenting demands — only leads to more demand for accommodation from POC. More entitlements for white people. More cries and pleas to center whiteness and the comforts it affords its bearers.

I’ve swallowed my tongue on too many occasions. Made the decision to let White Supremacy go unchecked far too often.

An anti-racist commitment requires people like me, an Asian American POC, to use their platform to say: “No more.”

No more silence when our silence hurts black and indigenous POC.

No more attempts to educate white people. They are capable of educating themselves.

Until Black Lives Matter to all, my life will never matter to white people.

Until white people can see how the work of anti-racism is theirs to complete, how their privileges are unearned and undeserved, how meritocracy is a myth that upholds and reifies White Supremacy, there will never be opportunities sufficient to allow POC to “bootstraps” their way to a life of success.

Until people like me stand up and demand that our humanity is recognized, that black and indigenous voices must be heard, attended to, and taken seriously, none of our voices will be taken seriously.

Until white people recognize how their covert racism and implicit biases rob POC of humanity, none of us will have relationships of integrity.

There is no spiritual bypass. Transformation is not a beautiful walk in the park, full of beautiful gifts you pick up and open as you walk along the path. Transformation is a walk through the hellfire of our collective, shared reality of White Supremacy. Transformation requires courage to open gifts in rough packaging — gifts we are afraid to open. Healing our society requires an ongoing commitment to self-work, which means addressing the ways in which we have been misshapen by White Supremacy. This is the path we must walk with courage as we journey towards a sustainable and inclusive future.

But the first step, at least for me, is recognizing that strategic accommodation will only reinforce White Supremacy.

Posted in For Providers, Self Improvement and tagged POC, Racism, White Supremacy
← Forget About #QuarantineGoals. Focus on Your Values to Achieve Success.
(Free eBook Download!)Beyond Performative Allyship: On Statement-Making and Organizational Commitments →